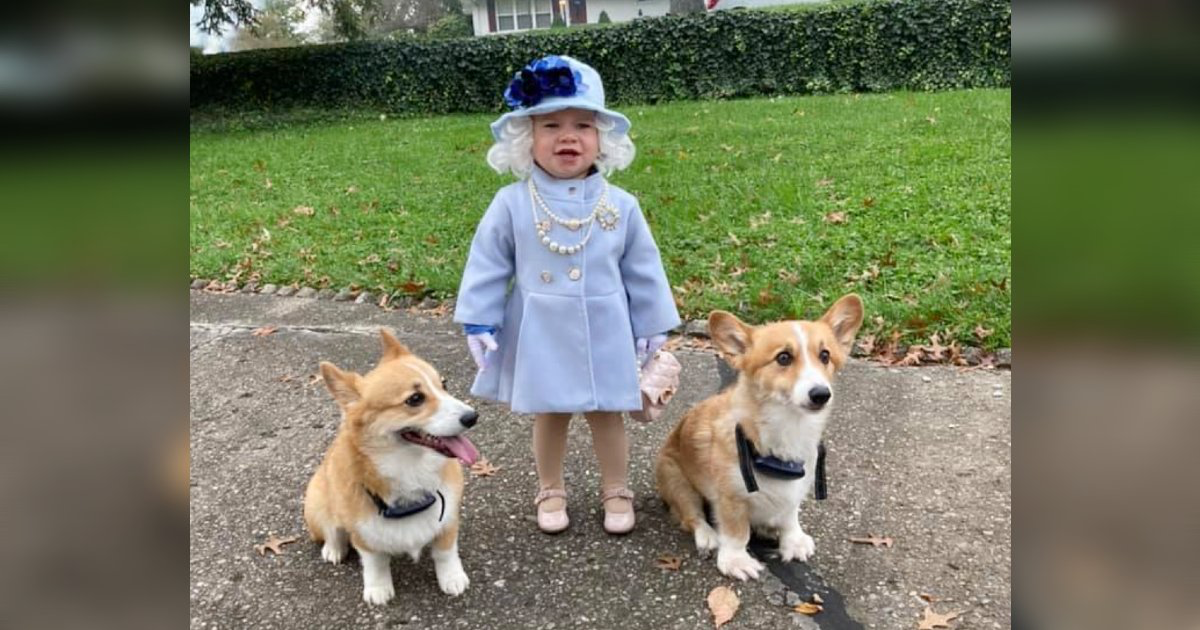 A year-old jalayne’s mom decided to dress her up as the queen in a cute Halloween costume. She did not know this would attract this much attention towards her daughter. A toddler’s Halloween costume gets the attention of the Queen of England.

Katelyn Sutherland, the mother of One-year-old Jalayne from Ohio, made her daughter look the cutest in her Halloween costume. Jalayne was dressed as Queen Elizabeth II Halloween. The toddler wore an adorable outfit inspired by the Queen. She wore a powder-blue coat, flower hat, and gloves and accessorized with a tiny clutch, a brooch. The cherry on the top was the curly white wig. The Queen of Cute!

Jalayne pulled off the most adorable queen costume of all time. To make it even better, she clicked some awesome pictures of little Jalayne with two family dogs. The best part about the two were they were queens’ favorite dog corgis.

The mini monarch rules the internet.

As any proud mom would, Katelyn posted her daughter’s pictures on Facebook and sent one of the photos to the queen herself.

These pictures took the internet by storm and quickly went viral. Although Katelyn did not expect a reply from the queen, who could have stayed away from a tiny little fan. After receiving such cute photos from Katelyn, Queen Elizabeth II was flattered. The family received a letter from Windsor Castle and it had a personal message from the queen herself. The personal note said – – “The Queen quite enjoyed the splendid outfit.” Katelyn posted the picture of the kid holding up the letter with a big smile and a cute white wig. She has even perfected a tiny royal wave.

Katelyn said while talking about the outfit that she hand-stitched the hat, glued the hair on, and curled it. She said the inspiration for the outfit came from the dogs as the dogs are Jalayne’s best friends. Katelyn shared that she loved the wholesome treatment her daughter was getting. While walking around on Halloween they received many compliments. People bowed to her, some even did the royal wave and said ‘Your Majesty!’ This tiny queen has some big fans.

After the pictures of this tiny queen went viral the family has been receiving a lot of love online. Jalayne has made many fans and people are loving all the cuteness. This look is a crowning achievement.

This family has taken their Halloween game too far or too cute. Halloween is becoming more and more interesting every year, anyways we are eager for more. Is it too early to be thinking about Halloween 2022 already?