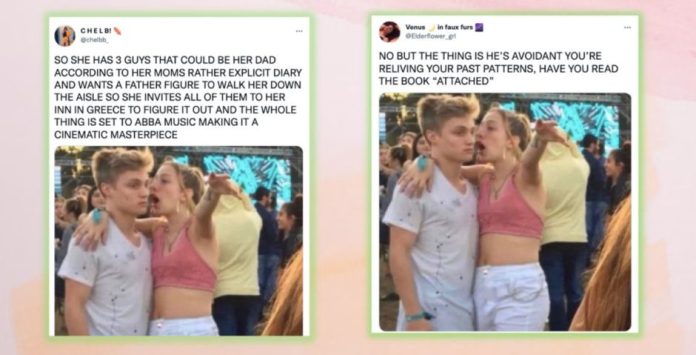 Home ART Woman from new 'girlsplaining' meme has spoken out about what was going...
ART

Memes are significant in today’s world which everyone makes and enjoys. Many memes have a shelf life and fade away in some time.
Well, there is one meme that is captioned ‘girlsplaining’ that is going viral these days. In the photo, a girl can be seen saying something in a guy’s ear and he does not seem to find the conversation interesting.
People took the snap and made it into a viral meme with various interpretations and believe it or not some of them are funny.

Netzines also found women in the picture and according to her, this whole situation is pretty hilarious.

"Bro I'm telling you, a Gemini cannot date a Scorpio, they're incompatible when Venus aligns with Saturn bro, it emits a toxic aura. Trust me bro." pic.twitter.com/NPlbNgJv7N

PAUL ATREIDES ISNT REALLY A "GOOD GUY" NEITHER IS HIS SON LETO II OR THE BENE GESSERIT. ALL THE CHARACTERS IN DUNE HAVE VERY SERIOUS FLAWS. WITH DUNE, FRANK HERBERT IS WARNING THE READERS OF THE DANGERS OF CHARISMATIC LEADERS. pic.twitter.com/sgqIhDfA7U

"I'm telling you bro, it had EVERYTHING. Amanda Bynes. Channing Tatum. Soccer. She dressed like a dude, played better than the entire team, AND got the guy in the end. And it lost to CRASH? I call bullshit bro." pic.twitter.com/28s180jX3z

"AM NOT A WEIRDO AH ACTUAL PLAY FOR MOTHERWELL" pic.twitter.com/mfNPe4i7Ev

After the photo went viral many internet users tracked down the woman in the picture whose name was Denise “Denu” Sanchez is from Argentina.
After she was identified she quickly gained fame and got a fan following. Explaining the event Denise told that the picture was pretty old and the boy in the picture is now an ex-boyfriend. It was taken in a club in Buenos Aires in 2018.
The picture was taken for someone else and they also capture the legend meme today. The couple just happened to be in the background when the snap was clicked.
This meme has been getting attention from all over the world and people are making their versions of it as well.
Denu told KYM: “I was featured in the newspaper in my city, many people followed me on Instagram, and people have written to me and asked how it happened.”
Well with the fame trolls also come into play. Denise has also been getting trolled over being and ‘toxic girlfriend’ over just an image.
But Denise and her new partner have managed to overlook the bad and focus on the funny side of it.
However, Denise did not reveal what she was saying in the picture but the internet has pretty wild guesses.

0
People love fashion and experimenting with styles, sometimes it turns out to be fantastic sometimes not so much. We...
Read more